This weekend, like a great many SF/F fans and writers (both aspiring and inspiring, if that doesn't sound corny), I made my way down to Brighton for the World Fantasy Convention. Given that I've newly discovered fandom, and that it's usually held in North America, I knew I couldn't miss it. This was doubly true given that I'm moving back to the Bay Area at the end of the year, and wanted to meet a few more British-based writers before my departure.

On that score, I wasn't disappointed - and even better, I discovered a super-nice community of writers, agents, editors and fans. Frankly, after four days of being around people who are pretty roundly interested in the same things as me, it's been kind of a disappointment going back to work and my normal life.

In any case, it was held over four days in the Hilton Metropole, right on Brighton's seafront. The nice thing about the event being in Brighton was the fact that the town's pretty compact, and it's easy to orient yourself - the sea's down, the train station's up, and the pier's a useful landmark for getting around. On the downside, Brighton's also a party town, hosting regular stag and hen parties and a couple of universities, so walking home at night was always kind of an adventure. 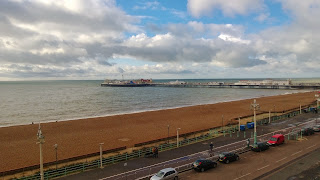 Inside the hotel, of course, it was a different world - there were panels going on pretty much all day from Thursday afternoon to Sunday, and publisher parties just about every night, but even if you weren't attending one of the events, there was always someone in the bar to chat to.

That said, at the very start I was a little intimidated, because I was there on my own and because I'm naturally something of a shy and retiring individual. So a person I'd like to thank is Paul Cornell, who I've chatted to a few times at BSFA events, and was kind enough to introduce me to pretty much everybody. And in repayment, I took a picture of him with my friend Paul Carnell, a meeting I've been hoping to engineer since about June. 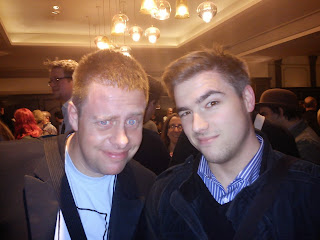 Both doing the eyebrow thing (yes, I asked them to).

Silliness aside, I think that helped me to come out of my shell a little bit later on, and just go and introduce myself to people. Scary as it was to actually meet some of my heroes, whom I've been reading for years and years now, I realized this was my chance to meet folks, so I made sure to say hi to as many of them as I could find. In addition to folks like Pat Rothfuss and Joe Abercrombie, I introduced myself to literary agent Juliet Mushens and author Lou Morgan (who was also one of the redcoats, or staff members helping to facilitate events and herd the authors and fans in and out of panels, among many other duties; big thanks to all of them, btw!).

It may sound a little dorky, but "Hi, I follow you on Twitter and wanted to say hi" seems to be enough of an ice-breaker at these events. And it was gratifyingly common to have them reply, "Oh, right! Nice to meet you too!"

Of course, in case I'm giving off the impression of having been completely unfazed by all of the writers around me, I should relate what happened at my first interaction with Neil Gaiman. He'd just finished a panel on comics, and was desperately trying to get to his next commitment, while also trying to be nice to fans (like me) who wanted to take pictures or get his autograph or whatever. I managed to get his autograph in my notebook, but also wanted to thank him for having retweeted my post about his reading of Fortunately the Milk.

So I ended up scurrying after him as he tried to exit, calling out, "Thanks for Fortunately the Milk!" while he hurried out of the room. I spent the next 24 hours mortified, and trying to persuade myself that this is just what happens when you meet the person who, effectively, inspired you to write. The story has a happy ending, in that the next night I ran into him again at the Gollancz party and apologized for having chased him out of the comics panel; he graciously forgave me, and bore my thanks for the retweet with excellent humor.

And the take-away of that story is, I can keep my cool to varying degrees around most of the best and brightest of fantasy literature, but my fanboy-threshold is Neil Gaiman. This is a useful thing to know.

The rest of my interactions went much better, apart from when I got locked into a conversational death spiral with Joe Abercrombie and James Barclay about my umbrella; and yet even they were nothing but friendly to me for the rest of the con. I even made friends with a few folks I met in the bar on the Friday, and joined them for dinner at an American diner not too far from the Metropole; one was an artist specializing in steampunk, Vincent Shaw-Morton, whose work was on display in the art room upstairs, while the others, Kit Cox and Jonathan Green, are authors. All of them super-nice, and I hung out a bit with them again at points on the Saturday and the Sunday. 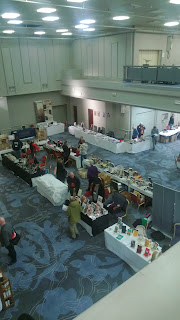 Another nice feature of the con was the so-called Kaffeeklatsches and Book Clubs. I signed up for the Kaffeeklatsch with Tad Williams, where the conversation (there were about 20 of us chatting with him) ranged from his books to the future of communications and the physical book. My one Book Club experience was with Robin Hobb, to discuss Assassin's Apprentice, the first in her Farseer series. I think I earned everybody's annoyance by having only read that book, which meant they couldn't talk about the sequels (thereby becoming That Guy when it came to spoilers), but it was still fascinating to hear how she came up with the series, and how it evolved in the writing.

Because it was Halloween, and the 150th anniversary of Arthur Machen's birth, there was a lot of programming around those two themes. Machen, in particular, was the subject of a stream of panels, but the con organizers also had a performance of two short stories by MR James on the Saturday night. One of the rooms was decked out like an Edwardian antiquarian's sitting room, and Robert Lloyd Parry played the part of MR James himself, recounting and partially acting out the stories "The Ash Tree" and "Oh, Whistle, And I'll Come to You, My Lad".

Lit only by a few candles, both stories were wonderfully creepy - MR James was known for reading his stories to his circle every Christmas, so it was nice to pretend we were listening in on one of those long-ago nights.

There were, of course, other parties, and readings, and conversations in the bar, but there's not really time to relate all of them. But it was great meeting a bunch of people I know only through their books, or through Twitter, or who I didn't know at all until I met them there. It makes me a little sad that I won't be able to see them at the next British con, but it also makes me even more determined to get to more of these events in the Bay Area.

After all, it's not always that you find yourself so well in your element. More than anything else, that's what I'll take away from the weekend - no matter where they came from, or how many books they've sold, or even if they haven't sold a single short story, the folks who came to the event were mostly into the same things as me, and it felt great to finally be with my tribe.
Posted by Francesco Radicati at 13:44